Atalanta face SPAL in the 20th round of the Serie A Italian Championships. The match will take place on Monday, January 20 from 9:45 pm. at Gewiss Stadium. 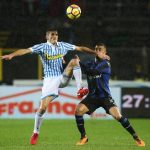 The Atalanta hosts ranked 4th in the provisional 35-point standings, as did the fifth Roma before the start of this round. The Goddess are 7 points out of third in the Lazio standings. Atalanta recorded 10 wins this season in Serie A, allowing only 4 losses. The team difference is 49-26. Led by Gian Piero Gasperini boasts the strongest attack in the Italian Championship. Atalanta failed to record lunch in their last 2 matches after being eliminated by Coppa Italia after a 1-2 defeat by Fiorentina.

In the last round took a point on their visit to Inter after draws 1:1. In his last household, Atalanta defeated Parma 5-0, and before that Atalanta defeated Milan with the same result at home. The Atalanta team is in a series of 4 consecutive wins on their own ground in all tournaments, having scored 15 goals in these matches.

The SPAL team is in last place in the 12-point asset ranking. Led by Leonardo Semplici has achieved 3 wins since the start of the season, and logically is at the bottom of the standings. SPAL has suffered as many as 13 losses and is likely to add another defeat to its account Monday night. Only three of their 19 matches this season have ended in a draw. Leonardo Semplici’s alumni are in a series of 3 consecutive defeats, two of which in Serie A.

In their last match, The White and Blues lost 0-3 to Milan in the Cup tournament. Previously, SPAL defeated Fiorentina 0-1 in Florence and lost their home side to Verona 0-2. Most recently, the team recorded success on the Turin 2:1, but we will soon see a victory for them against the strong team of Atalanta.

In the first match between the two teams this season they dropped five goals as Atalanta won 3:2 away from home. In their latest SPAL household, The Goddess recorded a 2-1 success. In our opinion, Atalanta will be the ultimate winner again, and may win the handicap this match. Good luck with our value soccer betting predictions for today!