Sheffield Wednesday face Manchester City in the FA Cup 1/8 finals. The game will be played on Wednesday, March 4, at 7:45 pm at Hillsborough Stadium. 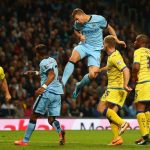 Sheffield Wednesday has been underperforming lately, especially when it comes to home games. Garry Monk alumni have lost 5 of their past 7 games to their own public. During this period, the Owls suffered unpleasant losses from Darby County (1:3), from Reading (0:3) and most of all from Blackburn (0:5). On Wednesday, the Sheffield Wednesday team faces an even greater challenge as it accepts the English champion. The hosts can boast of just one success in their last 8 games and it will be a surprise if they make it difficult for Pep Guardiola’s team.

Manchester City added another trophy to their storefront after winning the League Cup for the third consecutive time. On Sunday, Pep Guaridola’s players beat Aston Villa 2-1 in the Wembley final. Manchester City have scored both goals before the break and set the match, aiming to do something similar in the upcoming match.

This was the fourth consecutive win for Man City, and before that we should celebrate their victory over Real Madrid in the Champions League at the Bernabeu. Manchester City are in a series of 3 consecutive away games and 3 consecutive wins, with a new visit now. They come in as huge favorites in the match and are expected to win fairly easily.

Manchester City have won 10 of their last 12 away appearances, scoring 2 or more goals in 9 of those matches. Sheffield Wednesday is in rather poor shape and I do not believe that with its play in defense it can stop the strong attack of the guests. In my opinion, Manchester City will win at least 2 goals difference this match. As a bolder bet, you can play guest success with -2.5 Asian Handicap, as well as claim over 3.5 goals in a match. Enjoy our free football predictions today!